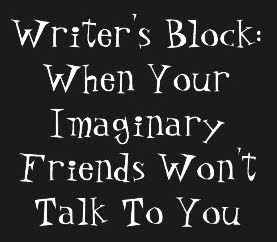 This is a post for the Insecure Writer’s Support Group blog hop. Visit the site and join up!

My entire writing life it seems I have been plague by writer’s block. The times when I am NOT too blocked to get anything written are far rarer than the times I am.

Writer’s block is a real condition that has been the subject of scientific study. You can read the Wikipedia article about it here: https://en.wikipedia.org/wiki/Writer%27s_block    Unless they’ve replaced the text with more rainbow flags and intimidation by now.

My writer’s block is like this: I may be working on a novel project and somewhere about page 50, I wake up unable to write one more word on the project. Which makes me avoid even trying after a certain point. Which leads to a period of time when I avoid even starting up my word processor because I’m paralyzed by guilt from not-writing.

The 50-page mark was when it normally hit me 20 years ago. These days the most common thing is that I get blocked the second day on the project. On a project that goes on for a longer period of time, I tend to go back to the story beginning and change all my plans for the novel in question, which leads to a story with five different first chapters and no ending. I’ve tried outlining to prevent this, using several methods, but as a dedicated ‘pantser’ (like Stephen King) I just can’t work that way. A completed outline kills the project for me.

Sometimes I believe the severity of my problem is linked to my Asperger’s Syndrome. This condition has included with it something called ‘executive function deficit’ which is pretty much the same thing as AD/HD. Makes it very difficult to be organized in the complex project of writing a novel.  But then again, a number of writers of the past, including Herman Melville, have been alleged to have Asperger’s Syndrome and they got novels finished.

My writer’s block problem does not seem to affect the writing of short poetry, or at least not very much. A number of times I’ve resolved to write a new poem every day, and I am able to do this. I haven’t continued the poem-every-day thing forever-and-ever, but that may just be because sometimes my mind needs a break. And of course the fact that for a long time I thought writing poems was counterproductive, even shameful.

I’ve embraced my poet-self recently. And after a time of writing poems every morning, I also managed to complete a short story called ‘The Skin Shirt’. It will be made available in ebook form at some point in the future. I’ve also started a second story, which sort of has a ‘parable’ feel to it. I’m optimistic about finishing this one as well.

Could one or two of the blog readers who pass through here do me a little favor? I would like you to download my very short poetry ebook, ‘surly petunia’, and write a brief review. It doesn’t need to be a 5-star review full of praise. I’m thrilled with 3 and 4 star reviews, and even 2 stars are better than nothing. It doesn’t need to be a fancy review full of literary terms, just a few brief sentences telling what you liked, or didn’t like, about the book.  I could use reviews at Goodreads & Amazon.com, and perhaps one at Smashwords as well.

You can download the book from here:
Smashwords (free download): https://www.smashwords.com/books/view/480237
Amazon.com (they charge 99 cents, not my idea): http://www.amazon.com/gp/product/B00NZ96EYE