Imagine a young writer. This young writer has lived all his life in Oconto, Wisconsin. He knows enough about his hometown to write a guidebook to the town. But when he sits down to write, he figures, ‘Writers don’t come from Oconto. Better set the story in someplace more writerly. Like New York City.’ And so the writer struggles, since he’s never been to New York City and only knows it from the novels of Lawrence Block and from watching Law & Order SVU. And he hates Lawrence Block and Law & Order SVU.

Think of the writing of Stephen King. If you are a Christian you may need to hold your nose as you think because King doesn’t exactly hide his bigotry when it comes to Christians. But if you have read King’s work at all you may have noticed what the Important Place in King’s work is: Maine. King is a Maine boy, he knows the towns and the people and the local dialect. He doesn’t have to fake it. He grew up with it. And so his Maine settings are right, and even people in Maine can feel it.

Think again of Charlaine Harris, author of the sometimes porny Southern Vampire series. Again, Christians may not care for her work based on her biases. But she set the series in small-town Louisiana, a setting she grew up with, and this adds a lot to the series.

But what if you are an army brat? Or, like me, a Kmart brat? If you have lived in many different places you may not know any of them all that well— not well enough to use them as Stephen King uses Maine. But there are ways to make use of place, even if you have a hard time figuring out what ‘hometown’ means to you.

In my own case, as the daughter of a Kmart manager who was transferred to other cities every couple of years, growing up I had one good place. My parents were both from the Upper Midwest. My mother lived in Brillion, Wisconsin growing up— it was where her father ended up when he emigrated from Germany after World War One. And my father was ALMOST from Wisconsin. His hometown was Menominee, in Upper Michigan. If you lived in Menominee, you could just walk over one of the town’s three bridges and be in the twin city of Menominee, Marinette, Wisconsin. I’d recommend the Hattie Street bridge for that little excursion, myself. My dad’s family have lived in Menominee since before 1870. We know this place.

You may not have a town like that. But what about the town where you suffered the horrors of high school? Or the town you live right now? Expand on the knowledge you now have about this setting by visiting the local historical museum, and listening to the fascinating stories of the oldtimers and middle-aged-timers. (If you are a real writer, you’ve already learned that the stories that other people call ‘grandpa’s boring old-time stuff’ is more interesting than half the stuff on television.) With this knowledge, you will have a virtual hometown you can use for fiction.

Other cities and towns may be important enough to you to be of great use in your writing. I’ve lived in four different cities in California: I could probably fake a California setting easily enough. I was in Tacoma, Washington for third through fifth grade, I could use that. I even did a year in Heidelberg, Germany in college. Since I spent my spare time there wandering around the old city and the walking trails nearby, I could do things with that setting. 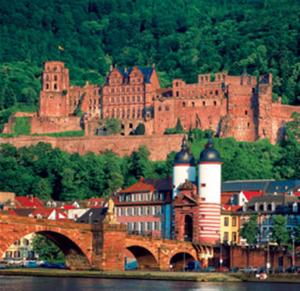 Heidelberg, Germany. I used to go for long walks on hiking trails on the hill above the castle.