This is a post in the Insecure Writer’s Support Group blog hop. Join at: http://www.insecurewriterssupportgroup.com/p/iwsg-sign-up.html

My latest ploy to avoid having enough time to work on my WIP is reviving my oldest blog— one from 2006. At that time, my main blog was called ‘Moreover the dog went with them’, after a line from the Biblical book of Tobit. (If you don’t have Tobit in your Bible, you need a better Bible. Tobit was in the Septuagint, the Greek translation of the Bible Jesus and his disciples used.)

In addition to Moreover, I started a second blog in Esperanto, the international language. It’s called ‘kaj la hundo iris kun ili’, which is the Biblical phrase from the Esperanto Bible. 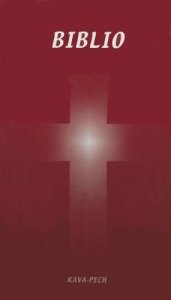 I have not posted in ‘kaj la hundo’ in years, but lately I decided to start again. The reason is that I am working on a science fiction novel in which Esperanto is the common language of the Terran Empire and also used as an intercommunication language by aliens, because it’s such an easy language to learn. Using Esperanto as a futuristic language used to be far more common in science fiction, but today’s science fiction writers are convinced that difficult English will be the One True Terran Language in the future. Not very logical, but…..

My revival of the ‘kaj la hundo’ blog is currently concerned with providing links to Esperanto learning material for English speakers. Here is the link, in case you want to have a look: http://kajlahundo.blogspot.com/  I welcome comments on any of the posts there in any language. Well, OK, if you are going to comment in Chinese or Swahili I won’t understand it a bit, but I welcome the comments anyway. 😉

I especially hope to find readers for that blog interested in learning a little Esperanto. Studies show that Esperanto can be learned in 1/10th the time it would take to learn another European language. So it’s a quick way to get a second language into your brain.

More recently I started a Facebook page in Esperanto called ‘La Sankta Biblio en Esperanto.’ As you may have guessed, it’s about the Bible. I try to regularly post verses or groups of verses from the Bible in Esperanto. I usually give the English as well, and for single verses a few other languages. I use the web page Jesus Army Multilingual Bible to help find the verses in different languages. Here is the link to La Sankta Biblio en Esperanto: https://www.facebook.com/sanktabiblio/

Kitten Picture of the Day 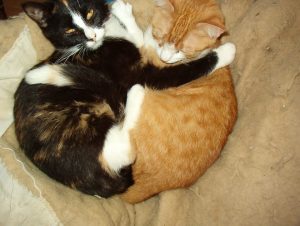 My cat Julianne— the orange one— got pregnant this spring and had to have an emergency caesarian. All of her kittens died. During the grief period Julianne needed to cuddle a kitten, so I handed her the youngest cat we had— seven month old Norbert (who is a girl kitty.)

Julianne has got over losing her kittens, and she’s grown a lot. She was so tiny at two years old the vet thought she was a pregnant kitten. But now she’s almost as big as her brother and kitten-daddy Derek. Perhaps being neutered let her grow more.IWSG