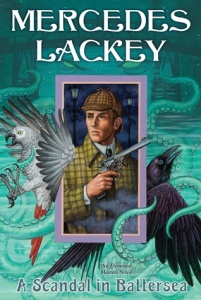 Recently I’ve been reading Mercedes Lackey’s more recent books in the Elemental Masters series, which features Sherlock Holmes as a character. Arthur Conan Doyle, the character’s creator, has I guess been dead long enough that other writers can use his character. But what do we know about Sherlock Holmes?

Perhaps you know that Holmes is a great detective who uses deductive (or inductive) reasoning to solve cases. Or that he is a brilliant man with loads of obscure knowledge. How do we know this? Because Conan Doyle told us so!

You may believe that writers should be more subtle than that. But really, how else can we convey that sort of information about our characters? We can write a scene that illustrates, we think, that a character is highly intelligent. But if we don’t say the words, some of our readers will conclude that the character is of average intelligence or even not that bright. Readers don’t all experience stories the same way, and many miss out on the subtle intentions of the author.

Muhammed Ali (born Cassius Clay) was The Greatest. How do we know? He said so, repeatedly. And now, after his death, when they do a television documentary about his life and death, the words ‘The Greatest’ are used by a great many people who knew him.

You may wrinkle your nose up at the idea of just telling readers about a character’s most important trait. Isn’t that telling instead of showing? Yes, it is. But that beginning writer’s mantra of ‘show, don’t tell’ is not a commandment from On High. Both showing and telling have a place in our stories. I mean, which works better, telling the reader that a character has green eyes, or writing an otherwise unnecessary scene to show the reader the character’s eye color?

Character features that you tell directly unify the reader experience. Everyone who reads your story will know that John is clever, Mary is clumsy, Jack is homosexual, and Marco is a black man. Being more subtle, and showing, means you are leaving readers out of the loop. I remember reading two different books in which a major character was black, but I didn’t know until the latter half of the book. The writer was just too subtle about it.

The question is, which character features are important enough to tell? You don’t want to make a long list of things to tell— that bores readers. That’s why we have the ‘show, don’t tell’ rule, because some beginning writers want to write lists of character traits into their story. You need to reserve the telling to no more than one or two important traits— traits that make your character who he is in the story.

Descriptive items and diversity status are also things that should usually be stated flat out. You don’t need to make a big deal about it. You just need to let your readers know to picture the character as thin, fat, tall, short, Asian, Caucasian, Gay or straight, wheelchair-bound or able-bodied. These things need to come in near the beginning— when you introduce the character for the first time.

It’s good practice, when telling about an important trait, to mention it more than once. I remember the James Blish novelizations of Star Trek episodes. He mentioned, again and again, that Lt. Uhura was a black woman. Sometimes he called her a ‘Bantu woman.’ I’m sure today he’d have to do a major rewrite. But none of the readers of his Star Trek books missed out on the fact that Lt. Uhura was a black woman of African origin. If he hadn’t repeated the description, I’m sure that some skimming-through readers who had not yet viewed the TV series might have pictured Uhura as a blonde white woman, or an Asian woman. Or one of those green-skinned ladies they had on the original Star Trek.

Telling, like showing, is an important writing tool, if done correctly. You need to learn when and what to tell, and what to show, in order to communicate your story to readers.